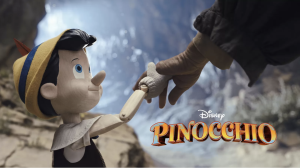 Directed by Robert Zemeckis, Pinocchio follows the familiar story of woodworker Geppetto, who wishes on a shooting star for his puppet, Pinocchio, to become a real boy. Halon’s team helped bring the animated classic to life, providing key creatives with cutting edge visualization and virtual production tools to maximize their creative freedom throughout the filmmaking process.

“Our team started off with the task of building a bespoke V-Cam system tailored to Robert’s workflow, so that he and (VFX supervisor) Kevin [Baillie] could shoot and not be inhibited,” said Kristin Turnipseed, the virtual production stage supervisor for Halon on Pinocchio.

Turnipseed went on to elaborate, “In a traditional V-Cam setup, you’ve got a heads up display [HUD], and the operator has controls over a wide range of things like: camera settings, lenses, positioning, attachments, scale, and speed, which go beyond just their physical location in the volume. This is what makes the camera tool very powerful. The virtual camera tool we built for Pinocchio was unique in that the director, Robert Zemeckis, wanted all of these features to be available but did not want to control them himself. So we had to really strip back the actual piece of equipment [physical camera rig] and move all of those controls to a separate operator interface. From there, he and I really had to build this workflow, this rapport, where I knew what he was talking about and was able to engage those controls as though he was hitting the buttons. This freed him up to focus solely on the creative control of the camera operation without the burden of the more technical functions.”

One of the unique challenges on Pinocchio involved building and laying out the cameras, props, and environments in such a way that would accommodate shooting multiple scale characters in one set and/or frame. The key characters ranged from Jiminy Cricket’s modest 4 in. height, to a roughly 2 ft. tall Pinocchio, to Tom Hanks’s Geppetto, standing 6 ft. tall.

Click here to read more about the project from Halon.