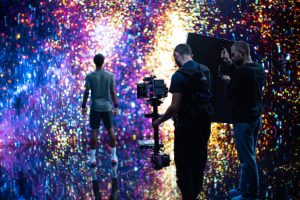 Based in a Paris suburb, Plateau Virtuel specializes in the production of films, video clips, and advertisements. The studio shoots against LED screens using a camera equipped with a tracking system that communicates with Unreal Engine where the content is rendered.

“With augmented reality, you can integrate content in the foreground of your scenery and make it interact with the actors’ movements,” said Francis Maes, CEO at SmodeTech. “And when filming beyond the LED walls, SMODE XR handles the set extension to create endless landscapes.”

The content from Unreal (3x 4K in DisplayPort) is mixed in the SMODE XR compositing tool together with the four SDI inputs from the multicam, with DELTACAST’s FLEX solution ensuring perfect synchronization and an end-to-end latency of just three frames, according to the company. “Our FLEX solution has been specifically designed to address these high-density requirements with multiple formats while requiring only one free PCie slot,” said Gerald Olivier, head of product marketing at DELTACAST. “FLEX can even support up to 32 I/O on a single PCIe.”

SMODE brings content designers tools for assembling, compositing, and adapting content for real-time video production. Thanks to SMODE XR, the whole virtual production pipeline is real-time; the post-processing, for example, is carried out live during the shooting.

The combined FLEX/SMODE XR solution is an additional server on top over the existing Unreal/nDisplay set-up, adding a layer of augmented reality and real-time final compositing.

Virtual production and extended reality are transforming the art of filmmaking, and SMODE says it is excited to offer a state-of-the-art software solution for creative directors and set technicians, added Maes.

“The way nDisplay operates with SMODE XR, via the FLEX solution, facilitates the workflow for any production that depends upon responsiveness and adaptivity,” concluded Bruno Corsini, co-founder of Plateau Virtuel. “Thanks to this solution and the team, we could upgrade our virtual production facility with augmented reality, set extension, and advanced real-time post processing. This definitely takes Plateau Virtuel’s offering to the next level.”