The National Association of Broadcasters (NAB) has completed the installation of a state-of-the-art media production facility at its headquarters in Washington D.C. The buildout of the facility—including a studio and media hub—was made possible by donations of critical equipment and studio design services from leading companies in the business of content creation and management.

“As the premier trade association representing America’s radio and television broadcasters and as the producer of the world’s largest convention for media and entertainment, NAB has a critical need for advanced audio and video production capabilities,” said April Carty-Sipp, executive vice president of Industry Affairs at NAB. “We are grateful for the generous support of the companies that contributed to the buildout of our new studio and media hub.”

According to NAB, the studio’s highlight is a curved,15-foot interactive Planar video wall with  that serves as a high-tech backdrop for live and pre-recorded programming. In addition to energy-saving LED lighting and robotic cameras, the studio features a powerful edit suite capable of 8K post-production.

Led by Emmy-winning producer and NAB’s vice president of media production Michael Khatcheressian, the association will use the studio to create national spots and branded educational content for its members. Productions will include compelling digital stories for NAB’s trade shows and award programs. The studio will also be used for production of NAB’s Congressional PSA Campaign and the NAB Leadership Foundation’s Service to America Awards. External organizations may rent the studio and its staff for original productions as well. 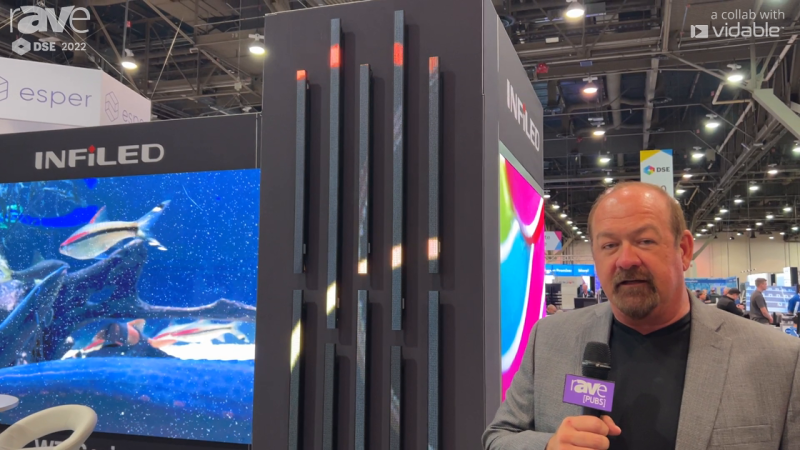 At DSE 2022 in Las Vegas, INFiLED showcased its INFiBanner Series, which is designed for architectural applications.