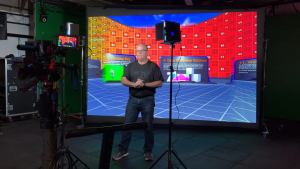 “The typical immersive media environment is incredibly expensive,” said Nicholas Jushchyshyn, program director of VR and immersive media at Drexel University Westphal College of Media Arts and Design. “It requires multiple high-quality displays and it can be challenging for an academic institution, small organization or independent producer to justify the investment. We wanted to utilize projection, rather than LED walls, to create a cost-effective solution. We worked with Scalable to create a high-quality solution for creating an immersive media environment, without the cost of LED displays.”

Jushchyshyn added, “We are utilizing a screen that is 10-ft. wide and 12-ft. height. It’s an existing screen that we have onsite. The talent has traditional studio lights on them, but they’re not overexposed and the projection background can be pure white. This is the result of two laser projectors that are synchronized, calibrated, warped, and overlapped. It creates the same intensity from a traditional LED video wall, but it’s from two projectors. Scalable enabled us to take two laser projectors and stack the projections with a perfect overlay.”

The ACE-Lab is not only utilized for immersive media programs but also by many other graduate and undergraduate degree programs, including animation, visual effects, and digital design. Drexel University needed to implement a system that would accommodate the other programs utilizing the space. “For us, there were many advantages to utilizing projection instead of LED displays,” noted Jushchyshyn. “Not only is it far less expensive, but it’s incredibly flexible if we want to utilize it in a different location. The space we’re using for production is a multipurpose space. We have designed the entire system on a mobile cart. We can retain the versatility of the room by being able to relocate the projectors.

Jushchyshyn added, “A secondary advantage of this particular approach is the future-proof design. We are currently utilizing a 12-ft. wall, but we can add another wall in the future and create a full projection surface across a larger space. Utilizing Scalable’s software, we can project side-by-side and have an overlap blend between the images.”

Scalable’s software automatically warps and blends multiple projectors into one seamless display. It allows Drexel University to streamline recalibration if the system has been relocated. “Scalable’s one-touch calibration is incredibly intuitive,” said Jushchyshyn. “Their automatic calibration outputs text-based files with the calibration result. Once the calibration is completed, it’s effectively saved onto the GPU. It’s fully transparent to any software that’s running on the operating systems. By allowing the data to be saved internally to the GPU, it eliminates nearly all latency and any complexity on higher levels of software.”

The result was successful at all levels. The immersive media system provided Drexel University with a high-quality, cost-effective solution. “We can recreate the traditional immersive media experience at nearly a tenth of the cost of a traditional solution,” said Jushchyshyn. “We also have the added benefit of being able to readily move so we can maintain the flexibility of the space. We’ve been working with Scalable throughout the last 20 years. We are involved in dome projection and building projection, which is how we were originally introduced to Scalable. It wasn’t until the studio application where we had utilized Scalable in a very unique way.”

Jushchyshyn concluded, “Scalable provides opportunities, in particular for schools and independent productions, to work with immersive media technology. They can incorporate the software implications and toolsets identical to feature film-grade LED walls, motion capture, and camera tracking. It’s the same technology as a large production but at a more accessible price point.” 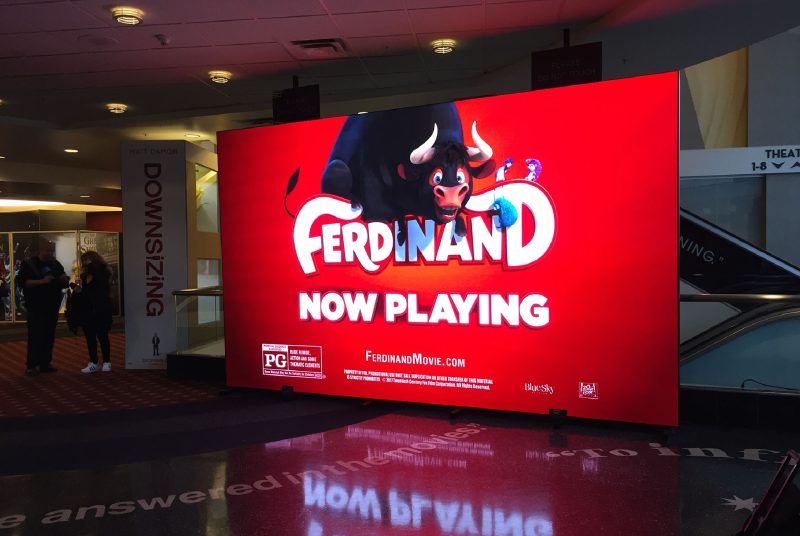 Nanolumens has received DCI certification for its Engage Series; the certification was created to establish and document specifications.