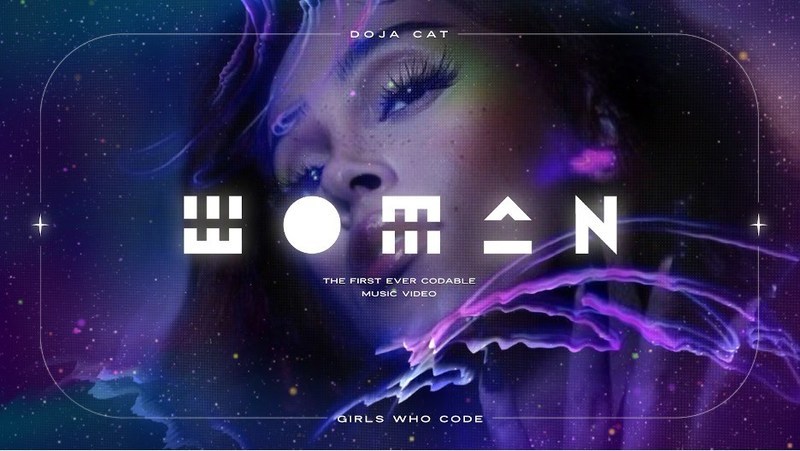 Doja Cat and Girls Who Code have released DojaCode, an interactive experience for the rapper’s music video and hit single “Woman”, off her chart dominating album Planet Her.

Inspiring a new generation of computer scientists, Doja Cat and Girls Who Code are inviting fans to direct aspects of the music video, all by using code.

As users visit the DojaCode site, they are able to unlock hidden video content using basic coding languages. From changing nail designs, to controlling the sky, to manifesting Doja herself out of thin air, DojaCode gives fans the opportunity to play the role of music video director by altering key creative elements and unveiling hidden easter eggs.

“I am so excited that Girls Who Code has partnered with me to make my “Woman” music video the world’s first codable music video,” said Doja Cat. “Fans all over the world will get to input code via a microsite and unlock some really cool special features. It’s going to be awesome.”

The aim of the experience is to show a new generation of fans who may be unaware of the career opportunities in the technology and computer science field just how creative and fun it can be.

“At Girls Who Code, we know firsthand that girls and young women are some of today’s most powerful creators and change-makers”, said Tarika Barrett, CEO of Girls Who Code. “However, too few know that they can have a career in computer science, and that it can open up an entire future of possibility to nurturing their passions. Learning to code enables you to change the world around you, and we’re thrilled to partner with global superstar Doja Cat, beloved by young people everywhere, as we invite girls to experience Planet Her, a place where they get to be in control.”

Mojo Supermarket, the creative company that hacked the Oscars to include female directed films, dreamt up the idea to get more girls to try coding. They partnered with creative digital production studio Active Theory and Doja’s label, RCA Records, to make it a reality.

“We want to get more girls to try coding. But there’s a thousand other things that girls care about more than coding,” said Emily Berger, creative lead, Mojo Supermarket. “And Doja Cat is like 999 of them. So we were like…can Doja make learning to code cool?”

“This project has been an especially meaningful and unique one for me. Seeing more inclusiveness in creative fields is something I’m really passionate about, so to be part of a project that gives young girls exposure to a whole new industry, while acting as creative directors of Planet Her all by using code, really means a lot,” added child., who directed the “Woman” music video.

The partnership with Doja Cat is the latest in a series of Girls Who Code culture change campaigns designed to transform the common narrative of what a coder looks like and does. Empowering girls and people from underrepresented groups in tech to envision themselves as the future of the industry is key to fulfilling the organization’s northstar mission of closing the gender gap in tech by 2030.