Florida’s largest virtual production stage, The Airlot 21, has officially opened. The all-new 22,000 sq. ft. stage is located on the backlot at Universal Studios in Orlando. The Airlot used technology and expertise from 4Wall Entertainment, Absen, Brompton Technologies, and disguise. 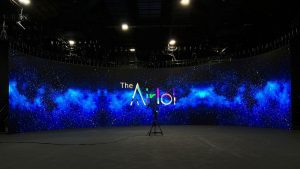 It all began with a brief phone call from The Airlot. “It just so happened we were already heading to Orlando for InfoComm, so we immediately set up a meeting,” said 4Wall director of production Ben Danielowski. “Two weeks later, we had a deal in place and started figuring out how to source this much gear—in the midst of the supply chain calamity.”

The team hit the ground running and started to spec the gear for the massive LED video wall. The wall was built using 1,022 Absen PL2.5 Pro video tiles.

“The Absen product’s 8800:1 contrast ratio was the most obvious stand-out feature when we tested it alongside other LED screens,” explained Wayne Romanowski, director of LED services at 4Wall. “The blacks read as black on a scope and to the eye. Coupling that physical feature with Brompton Technology receiving cards and utilizing Brompton’s HydraCal calibration system, the PL2.5 Pro overachieves on the color spectrum with a 16-bit grayscale and HDR10. The 2.5mm pixel pitch gives you a slightly higher resolution of 200×200 pixel per panel than comparable tiles in this market.”

Watch the video below to learn more about The Airlot 21 Virtual Production Studio.

The team planned for a 14-day install but with the infrastructure in place at Universal Studios’ Stage 21, were able to build this volume much faster than initially expected. The rigging was complete in two days, and the physical LED build took an additional three days.

“The Airlot studio is showing the wondrous possibilities for LED stages in an Airbnb format for a variety of content producers,” concluded Webster Moyle, account manager, Absen. “We love showing that Absen is trying to make the world shine brighter with our innovative products and services.”